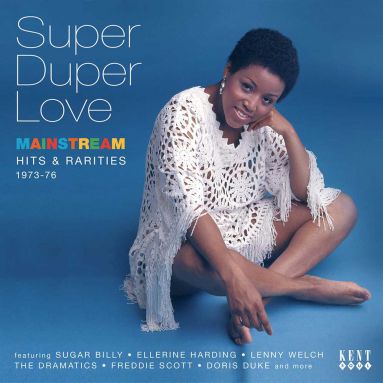 Mainstream Hits & Rarities 1973-76 Various Artists (Mainstream Records)
For a few years in the mid-70s the Mainstream label and its subsidiaries offered a constant stream of high quality black American music. Veteran record man Bob Shad’s company quickly established itself with soul collectors and sold lots of singles in a relatively short period of time. Only a handful of those 45s were issued in the UK but import specialists did brisk business with Mainstream repertoire until Shad suddenly closed down the label in 1976.

Most of the company’s catalogue has been unavailable in the UK during the CD era but recently Kent put out a well-received set that did much to remind people what good records Shad released. Our second collection offers a slightly broader overview of Mainstream’s output, embracing funk, ballads, deep soul, group soul and even a track or two that would have been called disco if they had come out a year or so later. Almost half of the featured selections reached the R&B charts and some also made the Hot 100. Our title track, an R&B Top 10 hit for Detroit’s William “Sugar Billy” Garner would later give the UK’s Joss Stone her breakthrough hit almost 30 years later.

Mainstream’s roster embraced soul and R&B stars of the calibre of Lenny Welch, Freddie Scott and Little Richard, cult soul heroes John “J.G. Lewis” Gilliam and Calvin Arnold, heroines Doris Duke and Sandra Phillips, top-tier acts such as the Dramatics and a bunch of artists who but for the lack of a hit could have been as big. None of the featured tracks have appeared on UK CD before and all are mastered from the best possible sources.