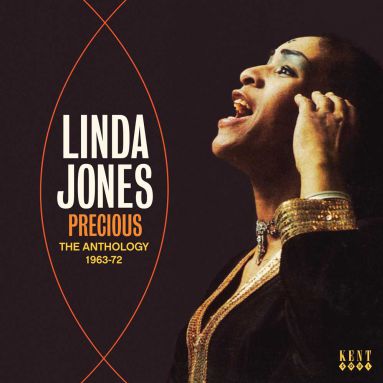 Precious – The Anthology 1963-72
Soul music has never had a singer with the extraordinary vocal power of New Jersey’s Linda Jones. Her arsenal of vocal shrieks, wails, passion, sanctity and full-on fire has enthralled soul fans since she burst onto the scene with her breakthrough hit ‘Hypnotized’ in 1967. Those who know and love her work will vociferously tell you she is, simply, the greatest female soul singer of all time. At the very least, she is up there with any of her internationally famous peers, yet her catalogue remains largely unrecognised outside of soul’s inner sanctum.

Linda sang every song how she felt it and with a strength and power very few of her peers could match. The unbridled emotion in her voice brought an edginess to her work that is uniquely hers. She pushed the boundaries of soul in a way few others ever have, before or since. Linda was her own woman, a strong-minded if troubled soul who poured every ounce of her human emotion into every song she sang. It was the only way she knew how. Restraint was not a word that was in her vocabulary. She just let everything a song said to her come out at each session. Nobody ever expected her to sing any other way. You get the impression she would have given short shrift to anyone who did.

Her career was helmed almost from the off by the great singer-songwriter-producer George Kerr – a man who knew that all he needed to do was provide the right vehicle for his protégée to sing the hell out of for a masterpiece to evolve. This happened time and time again over the five years that separated her first hit and her final recordings. Many of those masterpieces are included here in “Precious”, the first Linda Jones collection to feature tracks from each of the labels for which she recorded. Collectors will be pleased to see all four of her Neptune recordings on CD for the first time, along with one side of her 1963 debut 45 as Linda Lane – a revival of her idol Jackie Wilson’s ‘Lonely Teardrops’ (we’re saving the flip for another compilation).

Linda was on the brink of bigger things when she died, just as her epochal remake of the Impressions’ ‘For Your Precious Love’ was ascending the US R&B and pop charts in 1972. We can only speculate what they might have been but there seems little doubt she was ready to join the realms of female soul superstars. She continues to be revered by serious soul fans. Her no-holds-barred, frequently histrionic and always unique style has made her as much a legend in soul circles as any of her better-known contemporaries. Had life dealt her a better hand, she may have been up there with the Arethas, Dionnes and Whitneys in the eyes of the public at large. Instead, a coterie of hardcore devotees continue to celebrate the special talent that was hers and to enjoy the 40 or so sides she recorded in a career that spanned just 10 years. This CD features two dozen of the very best performances that have hypnotised her loyal fans for decades. It is as fitting a memorial to her talents as anyone could hope to own.