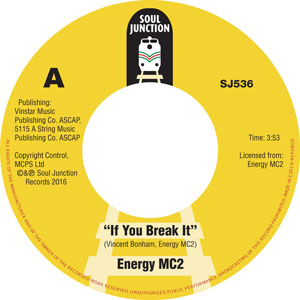 “If You Break It/Other Side Of The Mirror” SJ536

‘Energy MC2’ began as an energetic bunch of 10 and 11 year old neighborhood kids, who initially formed a band under the name of ‘Congressional Funk’ while still attending elementary school. The founding members were Vincent Bonham, Opelton Parker (the brother of Ray Parker Jr) and brothers Ufuomo and Eric Wallace, with the later addition of a further member Fred Gordon. A little over a year later, they initially became the backing band for local Detroit recording artists Mad Dog & The Pups going on to feature on some of their earliest Magic City releases “Hep Squeeze” (MC-007) (which they provided the horn section on) and the follow up release “Funky Monkey” (MC-009). A name change to ‘The Soulful Hounds’ followed which they are credited as on the instrumental flipside of Mad Dog & The Pups vocal version of “Why Did You Leave Me Girl” Magic City (MC-012).

After leaving Magic City, the band went through several changes in both name and personnel and became one of the biggest bands on the local Detroit music scene. At this point the band hired a bass player Ben “Rat Bass” Adkins, who brought with him the name of his former band, ‘Energy’. By then borrowing Albert Einstein’s formula for special relativity (E=MC2) and adding it to their inherited name ‘Energy’ they finally became ‘Energy MC2’ (a move deemed necessary to distinguish themselves from Adkins former band)As Energy MC2 the band soon began to seriously record original material which included the previously unissued 70’’s track “If You Break It”. The group line up on “If You Break It” included Vincent Bonham, Ufuomo Akill-Wallace, Arnell Carmichael, Ernestro Wilson, Opelton Parker, Gordon Carlton, Eric Wallace, Leon Lopez, Marvin Carlton and Marlene Rice. While an earlier session had too yielded a further two previously unissued songs firstly the flipside of this 45 “Other Side Of The Mirror” which featured the same line-up of musicians as “If You Break It” but with the addition of a second female vocalist Gwen Laster, while the second song “Juliane” a beautiful mellifluous ballad can befound on the ‘We Got A Sweet Thing Going On’ volume 2 SJCD 5011 cd album.