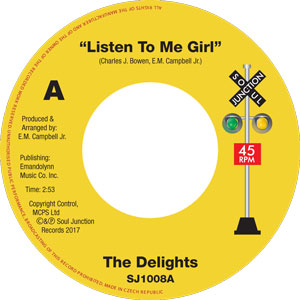 The Delights consisted of four male singers. With two of them being Manny Campbell’s cousins, brothers Keith “Toppie” (the eldest) and Ellis Hill, their cousin Jaime Hill plus a teenage friend of theirs. The lead singer was a girl called Peaches, all aged between 16 and 17 years old and all coming from Chester, PA. They had all previously been employed as individual backing singers on early recording sessions for the like’s of the O’Jay’s , Delfonic’s and Stylistic’s.
With a family connection to Manny Campbell it was inevitable that they would feature on some of his production sessions, with the Nuron’s “All Of My Life/I’m A Loser” being one of them. Manny gathered them together to form a vocal group of their own under the group name of ‘The Delights’. Under his tutelage they recorded the delightful crossover soul dance track “Listen To Me Girl” during the months of July and August of 1968. Sadly their only completed recording being young and somewhat unruly they never completed the project’s Manny had in mind for them. “Listen To Me Girl” was composed by Manny and Charles J. Bowen a fellow Philadelphian, musician and composer, Charles’s writing credits can be found on many of Manny’s other productions. During the mid 1970’s The Delights did go on to record two excellent 45’s for the Phil-L.A Of Soul Label.

Tearra’s “Just Loving You” is now regarded as one of the corner stone anthem’s of the modern soul genre. Tearra was born Teah Louise in Mobile Alabama. She joined Manny Campbell (who by now had relocated to Atlanta, Georgia) at his Emandolynn Music studio’s in 1979. During 1980 Manny offered Teah the chance to record a prospective new album entitled ‘Great Love’ releasing two lead 45 singles from the project on her. Firstly, under her real name of Teah-Louise the disco influenced “You Happened To Me/Got To Keep You Mine’ (Coastal-1002) followed by “Ooh Let This Feeling (Last A Long, Long Time) backed with the later in-demand “Just Loving You” (Midtown 1001). With Midtown then

being Coastal Records main distributor. This second release appeared under the artist name of Tearra, due to Teah Louise by now not wishing to use her real name. Both the Coastal and Midtown releases were only ever pressed in 500 promotional copies runs with the ‘Great Love’ album project never being completed due to Teah soon after marrying and leaving the recording business at her new husband’s request.