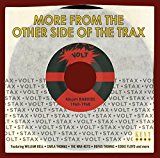 More From The Other Side Of The Trax

An enormous and impressive undertaking, “The Complete Stax-Volt Singles 1959-68” box set was issued in 1991. While pleased with its content, hardcore collectors were nevertheless disappointed that it was not as “complete” as it claimed to be, as it featured all the A-sides and only selected B-sides. While highly welcome, its release left more than 100 of approximately 225 “blue period” Stax and Volt B-sides un-reissued in any form. Several of those sides have since featured on CD compilations, either as individual tracks here and there or on Kent’s recent “The Other Side Of The Trax”, but that still left many awaiting reissue. Fortunately, the success of “The Other Side Of The Trax” has warranted this second volume. The 24 tracks here span almost the whole of Stax Records’ blue period, as far back as when the label was still called Satellite.

The release of this CD coincides with the 50th anniversary of the Hit The Road Stax tour of the UK and Europe, which offered a gathering of almost all the company’s biggest selling artists. It was not the first time Stax acts had been to the UK, nor would it be the last for some of them. Neither was it the first time a collection of artists from a major US soul and R&B label had visited our shores. Motown had celebrated its UK launch as a stand-alone label with a package tour that went all round the country and into Europe two years previously, but the shows were poorly attended. Soul music was still largely the domain of a devoted few and not yet big enough to sustain something so ambitious. The world outside of North America was just not ready. By the time of the Stax tour, everyone was ready. It played to packed houses, drew ecstatic responses and brought European popularity to almost everyone who was a part of the tour.

Most of the tracks here are completely representative of the sound of Stax half a century ago. That they were chosen as B-sides is no reflection on their quality. Records had two sides back then, and something always had to go on the flipside. Where Stax was concerned, their flips were almost always as good as their plug-sides. Here’s the proof.