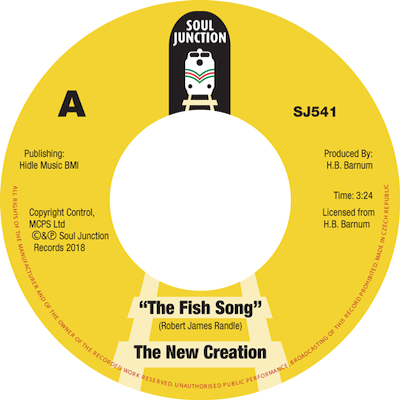 The concept of The New Creation began sometime during 1973 when Robert Randle penned the song “The Fish Song” (credited as Robert 51-X). “The Fish Song” was recorded as a salute to the door to door Nation Of Islam fish sellers (Whiting H&G). With William Cooper taking the lead on the b-side “Elijah Knows” (a tribute song to Elijah Muhammad, the late leader of the Afro-American political and religious movement, The Nation Of Islam). Adding teenage cousins Melvin Houston (Bass Guitar) and Keith Randle (Conga drums) and Wayne E-2X on vocals, The New Creation began performing with other high profile supporters of The Nation Of Islam such as heavy weight boxing champion Muhammad Ali, supporting his Celebrity Boxing Promotion Tours. They also shared the stage with other soul groups Philadelphia’s The Delfonic’s, L.A’s own The Young Heart’s and New York’s Kool & The Gang amongst many others.

Melvin Houston along with cousins, Rasheed Shakoor Jr and Nadirah Shakoor later form another group known initially as Black Velvet which in turn became Black Velvet & Satin Soul at the request of the groups two female singers, Nadirah Shakoor and Siedah Garrett. Black Velvet & Satin Soul a top 40 tribute band which broke up without making any recordings, allowing members to persue other career options. With Melvin Houston persuing a career in the Aerospace Industry, Rasheed went on to tour with Tina Marie and later Milli Vanilli. As for the girl singers they went onto bigger and better things with Nadirah Shkoor later becoming a member of the Hip Hop group Arrested Development before going on to be member of Jimmy Buffet’s tropically themed music Coral Reefer’s Band, a position she has held for over 20 years. While Siedah Garret’s career has lead her to sing backing vocals with an impressive list of legendary recording artists the likes of The Pointer Sisters, Michael Jackson, Quincy Jones, Donna Summer, Madonna, Jennifer Hudson and El Chicano amongst many others, still finding time for her own solo career as a performer and songwriter.

The New Creation’s “The Fish Song/Elijah Knows” is now a highly regarded and sought after 45 with Sweet Soul and Group Harmony collector’s in Europe and it’s native USA.