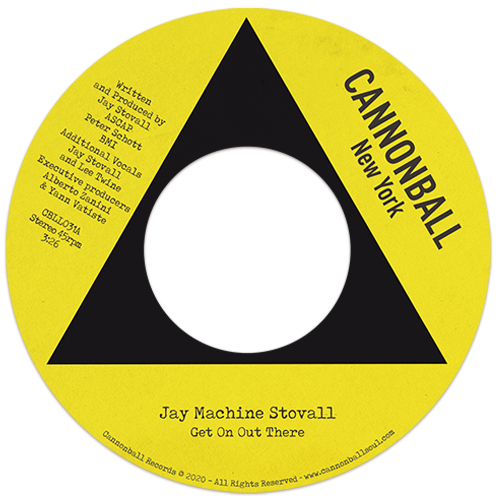 Two amazing early 80’s modern disco/soul unissued tracksJay Machine Stovall, now available to pre-order from Cannonball New York! The original voices that brought you the club hit: There But For the Grace of God Go I. I hooked up early this year with Jay Stovall via his really good friend Paris Ford who told me he had some unreleased material for us to listen to.I was a bit nervous when I first call Jay the first time, It’s not everyday you talk to someone who had a Hit record. We’ve spent hours on the phone and we’ve connected immediately, like when you talk to someone who knows you for years.

Genuine, passionate guy with a great sense of humour and who knows how to talk business. Jay had his first guitar at the age of 13 year old, playing with his school buddies from the 4th grade in Brooklyn NY. He played with several bands before finally putting together MACHINE in 1977 when the disco-era was in full swing and most R&B, disco, and funk lyrics were escapist in nature. “There But For The Grace Of God Go I” was a hit for the band, reaching number 77 on the Billboard Hot 100 and spending ten weeks on the chart.

t was a disco/soul masterpiece that became a club hit and is considered a cult classic from 1979. Moving On was their second and last release for RCA in 1980 and the group dissolved by 1981. Jay was later involved with Kid Creole & the Coconuts, Thunder Lighting & Rains, & Elbo Bones and the Racketeers just to name few. Jay Stovall never left his guitar & stop making music since then. We were lucky enough to manage to get two unissued songs from him from this era. Now fully remastered at Cannonball Records for your listening delight and dancing pleasure!

“Get on out there”, killer feel good two steps Modern Disco with a catchy bass-line & vocals to die for. It sounds like a future classic that you never heard before and no doubt it will destroy any dance floor. “Why” is a lovely duo ballad with beautiful lyrics.