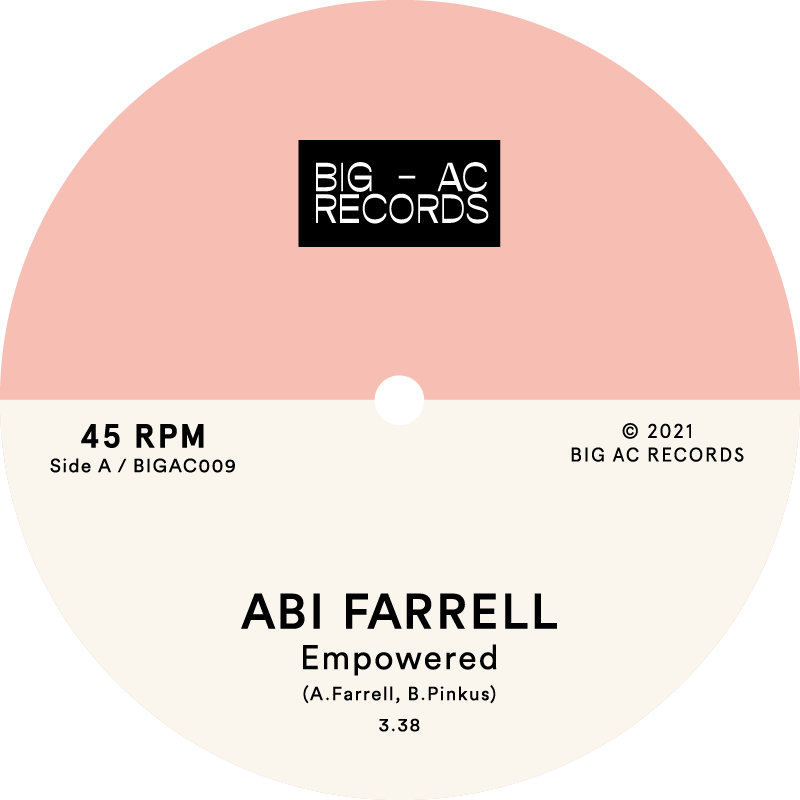 “Empowered” / “I will see you through”

British singer/songwriter Abi Farrell debuted on Big AC Records in the winter lockdown of 2020 with “I Will See You Through”, a dreamy Supremes-esque dancer of a track that was quickly embraced by the underground soul scene.

The new year brings a new single and also a beautifully packaged 7” vinyl to go with it! We are delighted to announce the second single,“Empowered”, will be out on 12th February and pre-orders for the vinyl are now available from Big AC Records.

The song bursts into life with its statement horn line, underpinned by a disco groove and funky textures of clav and wah.

Lyrically, “Empowered” focuses on the phenomenon of emotional gaslighting in modern relationships and the ultimate realisation that one should never need permission to be authentically themselves: “I knew who I was before you came on the scene…”

Described by London’s ‘Soul Stripped Sessions’ as “a powerhouse and then some”, Oxfordshire’s Abi Farrell was raised on a soundtrack of female-driven pop, funk and soul.
Influences from the likes of Aretha, Carole King, Eva Cassidy and Chaka Khan may all be present in Abi’s music but each song is brought into the here and now by her effortlessly pure voice and lyrical dexterity.

In November 2019 she released her debut EP ‘The Only Way I Learn’ which has amassed over 50K streams to date. Following its release, Abi was named Richer Unsigned’s ‘Artist of the Week’ – “Abi’s control and vibrato of herincredible vocal tone is truly stunning”.

At an East London jam In February 2020, a chance meeting with Nick Corbin (New Street Adventure, Lack of Afro, Laville), sparked a songwriting partnership that would develop fruitfully over lockdown. A shared love of soulful music contributed to ‘Empowered’ – Abi’s solo composition, re-produced in demo form by Nick – and the co-written ‘I Will See You Through’.
The songs attracted the attention of producer, Mitch Ayling (The Milk), who invited Abi and her band to record at Woods Lodge Studio in Essex.

‘I Will See You Through’ became Abi’s debut single on the newly established Big AC Records and was quickly embraced by the underground soul scene.
The single earned rave reviews and worldwide radio exposure, including plays from the likes of Craig Charles (BBC 6 Music), Robert Elms (BBC Radio London), and Kurtis Powers (The Face Radio, NYC).

Look out for the limited edition 7” vinyl featuring ‘Empowered’ and ‘I Will See You Through’ in early 2021!