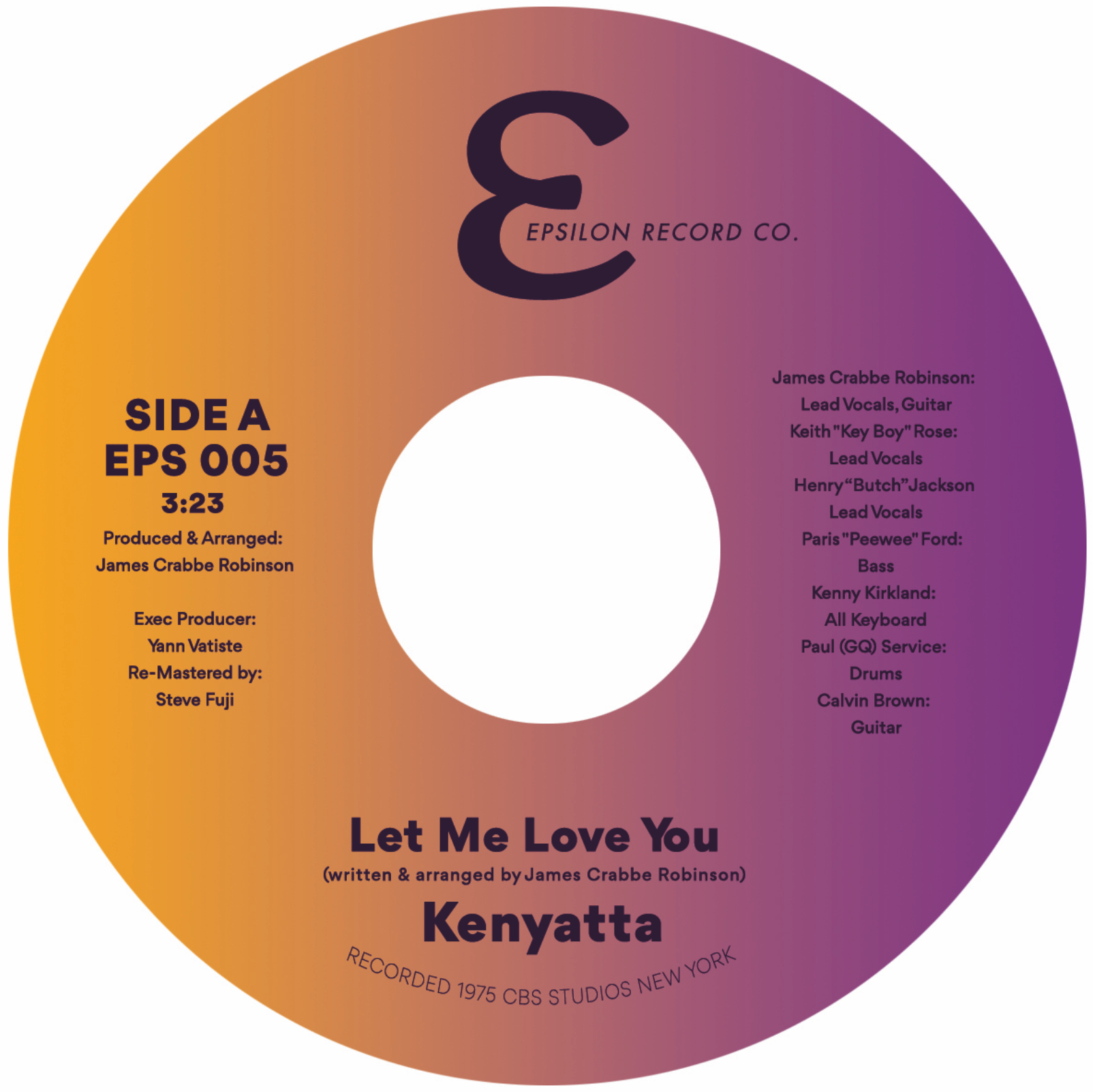 There was very little information about Kenyatta, the band that recorded the well-known and in-demand funk killer track: Kick It Off. In 2017, I started to research the band extensively, originally I believed Kenyatta was from Toledo, Ohio.

I found out that Leon Ngudu Chancler, (the famous drummer who played drums on Billie Jean for Michael Jackson) was the owner of the Ngudu Records label and he was also the owner of the Little John publishing company.Ngudu sadly passed away in 2018, but I was able to find his daughter Doreen. She was so excited to hear that someone knew about this particular record. In fact, she found a copy of the actual 45s in her father’s collection, but it was broken.

Unfortunately she had no information about the band. I kept looking and started to focus on two of the songwriters, James Robinson and Keith Rose. I quickly realised that these guys were actually from New York, Mount Vernon, to be precise. I discovered that James Robinson’s cousin was Paris Ford, one of the most enduring bassists of the last decades. So I decided to contact Paris and check if he knew anything about Kenyatta or if he could put me in touch with James. Paris replied to my post on Wednesday, January 24, 2018 at 2:21 am UK time. I was so excited, I was finally making progress!

Paris Ford wrote: “I think I have a copy of this record, it has really bad pop and scratches” Yes I was a member of the group! I played bass with them in the 70s I could not believe it ! I finally managed to find the guys behind the amazing KENYATTA group! Paris and I spend hours talking about music and I quickly realised that I was talking to a legend of funk, R&B bass player. I ended up starting my own label because of him and released Boogie On Down, EPS001 in November of last year.

While we were chatting, Parsi informed me that a year or two after the recording of Kick It Off, they returned to the CBS studio in Manhattan at the end of 1975 to record a full session, including 10 songs from an unfinished project that never actually came out. I asked him if I could listen to those tracks. I was blown away when I opened the attachments and started listening to these tunes. I’ve never heard anything like it and I knew these recordings were really special. If like me, you love to listen to obscured, unknown and sophisticated killer tunes! I am sure you will love these songs.

After almost 3 years, I was finally able to get a full license of 4 unreleased songs from this session. The master tape has been badly damaged, although the quality of the sound files is far from perfect, I do hope you will still enjoy them. We managed to remaster them and this is the first time they are released on vinyl by Epsilon Record Co. in a limited edition.

I would like to thank Paris Ford and James Crabbe Robinson for all of their help on this project, Steve Fuji and Ed Littman for the remastering work, Joel Maslin for the impeccable design.

Based in New York, James sang guest lead vocals with artists including Norman Connors(‘Stella’ and ‘Listen’) and Lonnie Liston Smith (‘Song For The Children’ and ‘Love Is The Answer’). He replaced Luther Vandross in Change and singing lead with the group on songs including ‘The Very Best In You’ (1982).  As a solo artist he signed to Tabu Records in 1987 where his one album was ‘Guilty’. That album contained the popular track ‘I Feel Like Going On’. Other artists he has recorded with include Jeff Lorber (‘Every Woman Needs It’), Lenny White(‘Attitude’) and Bob Baldwin. While with Lonnie Liston Smith, incidentally, James wrote ‘Speak About It’ on which he also played guitar. James’s cousin is Paris Ford, who played with Norman Connors, Lonnie Liston Smith and was the original bassist on Tyrone Thomas And The Whole Darn Family’s ‘7 Minutes Of Funk’. In 1995, Robinson teamed up with Mark Johnson for the track ‘Daydream’, taken from an album on JVC called ‘Daydream’, which became popular at Soul Weekenders and on London’s Jazz FM radio station. In 2001, he teamed up with another jazz keyboard artist, Bob Baldwin, for his album ‘City Sketches’.The track ‘Stay’, taken from this set, being highly popular. James Robinson is also known as James ‘Crab’ Robinson.