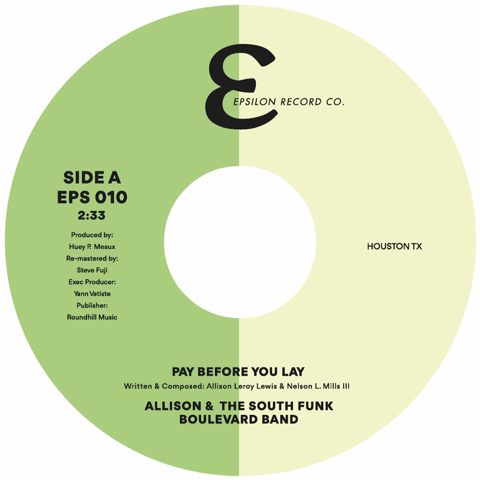 About Allison & The South Funk Boulevard Band: Allison Lewis (Robert Alician Lewis) ​Allison was best known as one of the members of the great Funk band “TSU Toronadoes”, who was the creator of the million seller, “Tighten Up” while backing Archie Bell & The Drells on Ovide & Atlantic an many more. Allison has also written some amazing songs such as, I Still Love You, The Goose, Only Inside, Work on it, to name a few.  However, when the band “TSU Tornados” split in 1971, “Allison Lewis” went on to form “South Funk Blvd” with two other members Jerry Jenkins, Nelson Mills.

They recorded a well known rare single with his band “South Funk Blvd” called “Skying High Getting Off On Your Loving” & “Be Together” on Captain Funk Records.   The rest of the band attempted to continue playing under the name “TSU Tornadoes”.   Allison and “South Funk Bvld” moved to Alabama and released their first single “What Happen to Association / Turn On With Music” on the label “Ovide” (#255) using the name of “Allison & South Funk Blvd”. ​ South Funk Boulevard Band members were: ​ Allison Lewis Ray Jackson Nelson Mills Carlos Tillman Michael Spencer Louis Howard ​ In 2013, Allison wrote a fantastic book,The Hidden Man: The Story of An Unfulfilled Dream.  I would recommend anyone to buy a copy from Amazon: ​ https://www.amazon.co.uk/Hidden-Man-S…​ The book was reviewed by his good friend, Mr connoisseur Dave Thorley.  ​

THE HIDDEN MAN: The story of an unfulfilled dream. “The track Tighten Up that Al and his group of fellow musicians, The TSU Tornadoes, helget create became one of the commerstones of a stule of musiccalled Funk. Throuyhout the years, their style has been copied, mimicked, and sampled around the globe.I could end there by telling, the reader that they provided a complete newcolour pallet that is still used to this very day by fellow musicians around the world. But having, read the pages of this book, I have to say that this is so much more. It is a story of a man that has strived and never given up. A man that hus traveled down a road that has had many folks to navigate and has arrived at this point with an uplifting, story to bell.” Dave Thorley, DI (Gloucester FM Radio 96.6 UK)