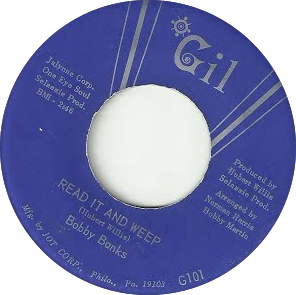 Bobby Banks came from the net, I couldn’t believe my eyes when I saw it and grabbed it immediately. It had to come from Austria and took bloody ages. So what’s all the fuss about then, well, they are like chalk and cheese, Hal Tiore is raw, horn laden and very southern whilst Bobby Banks is almost is a huge production, almost Philly in sound, with lashings of strings, which shouldn’t come as any surprise really when you see that it was produced by Norman Harris and Bobby Martin. Both our heroes have wonderful voices, Hal Tiore’s is harder, grittier, typically southern in its texture whilst Bobby’s is just right for fronting a Philly sound, slightly smoother and more rounded.
Both exude power, passion and emotion.

Hal Tiore’s tune was produced by Al Mitchell and the simplicity of the recording wouls suggest a one man band operation, ALM records being Al Mitchell records I would venture to suggest.

First stop whenever anything deep arrives is the wonderful Sir Shambling site, Bobby Banks is there in all its glory, but there’s no sign of Hal Tiore.
I can’t date these either, all I can guess is there late 60’s early 70’s, a cop out I know but!
Both have one thing in common though, they appear to be the first release on the labels, with both sharing the number of 101.