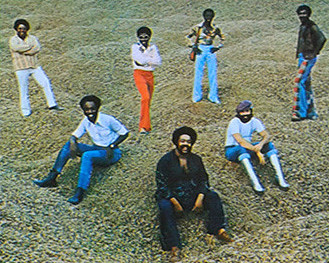 Terry provided the back story; “When my partner Clayton Ivey and I were signed as exclusive producers and songwriters with Motown , we also ran a southern A&R office here in Muscle Shoals. We were allowed to sign 3 artists per year to Motown records. If they did not like the ones we signed, we could lease them to another record company and give Motown a 2% override. Bottom and Company was one of the Artists they did want on Motown. They never really ever got behind the group as happened quite often back in the 70’s. Of the 500 singles released every week by record companies, usually only two or three ever reached the top 40 in any of the charts. Jesse Boyce was the Bass player, singer and wrote most of the songs for the group. He and the drummer Freeman Brown had been a part of the Fame Gang studio musicians and recorded a lot of the hits for producer, Rick Hall. After they were released from Motown Jesse Teamed up with producer Moses Dilliard. They produced “The Saturday Night Band” at Wishbone. Jesse sang the lead vocals, wrote all the songs and used the Wishbone studio musicians for the tracks. Their Disco LP and the song Come on and Dance, Dance on Prelude became a big Disco record around the world. Jesse later moved to Nashville and became a famous evangelist. He passed away last year after a 13 year bout with Cancer.” MD Records struck an agreement with Terry to release the 2 previously unreleased tracks that were recorded at the same time in 1973 as “Gonna find a true love” and You’re my life” which were subsequently released in 1974 on the Motown label.